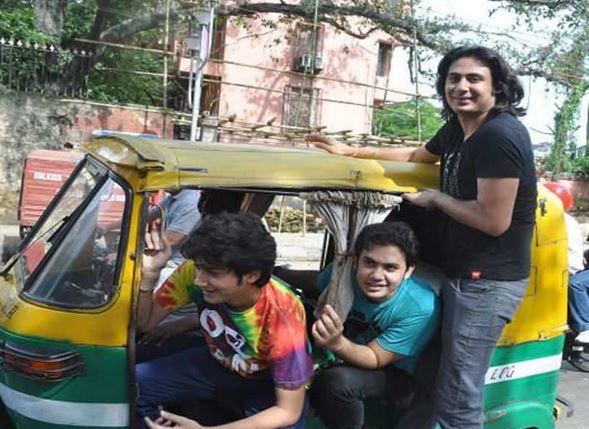 One of the first bands from Pakistan to debut in a Bengali film, the boys are here to take the city by storm.

They came. They sang. And they conquered. Raga Boyz, the popular band from Pakistan, has surely achieved a rare feat by not only singing but also featuring in a Bengali film, Bangla Naache Bhangra, directed by debutante director Nandini. The film revolves around a Bengali boy (Sayan) who falls in love with a Punjabi kudi (Pallavi). Before an informal adda with CT, the trio was also sporting enough to enthrall us with Mora saiyaan mose bole na…

How about introducing yourselves…
Nayab Ali: We are a band of three brothers, hailing from the Patiala Gharana of music. The band was formed in 2006 and the name Raga Boyz was coined by our father Ustad Hamid Ali Khan, who’s considered a singing legend in Pakistan. I am the eldest of the three and I specialize in classical and semi-classical music.
Wali Hamid Ali: I am the lead vocalist of the band — pop and semi-classical singer and composer. Performing live on stage is something I enjoy most.
Inam Ali: I am the youngest and my forte is classical. The USP of our band is that we compose and perform all genres of music — be it classical, sufi, rock, fusion or metal.

So, is it your first visit to Kolkata?
N: This is my second visit. I performed once along with my father here.
W: I am here for the first time and am loving every moment of it. I loved the food here — posto baata, sorshe maachh, mishti doi ! The girls are beautiful too ( laughs)!
I: Oh yes, Wali! In the last six years, the band has performed in London, New York, Sydney, Bangkok, Hyderabad, Delhi and so on. In fact, in Saudi Arabia, where music is considered taboo, we performed thrice, on the royal family’s request. Now we want to see how it is like in Kolkata. The people here are great music lovers.

And it is also for the first time that you all have sung for a Bengali film. How does it feel?
N: On top of the world. It is a Sufi rock number, which goes like Ali Ali tu kar bandaya duniya toon na daar bandaya . We hope the audience likes it and we keep singing for Bengali films.
W: I feel honoured. Added to that, I feel that the cultural exchange between India and Pakistan should be stronger.
We performed in the second edition of Times Sufi Nights in Hyderabad which was part of Aman Ki Asha. We also played with Rekha Bhardwaj and had a blast! But singing for Bangla Naache Bhangra has been an outstanding experience. We shot the song in Punjab and the way the sequence is picturized is just marvelous. I have no idea about Bengali film music. But I intend to buy some Bangla rock CDs and other music albums from here. I know Pritam. He is one of the best composers around. I have also heard that Jeet Gannguli delivers a lot of hit music now

I: Bengali as a language is extremely sweet. I have learnt three or four words like kemon achho? Bhalo achhi, bhalobashi, namoskar …( laughs).

Between you three, who takes the final call? Don’t you have ego clashes?
N: Wali takes the final call and we listen to him. You mean what we saw in Rock On!!? Well, we are brothers after all. Our mission is the same — to create good music. However, I know girls go ga ga over Wali and Inam when they perform on stage ( laughs).
W: We generally don’t have ego problems. But, yes Nayab and Inam depend on me when it comes to taking a call. And by God’s grace, the bonding between us is very strong.
I: I am more into riyaaz and not into any decision-making. Wali bhai is actually running the band.

How popular is Bollywood music in Pakistan?
N: Bollywood is huge in Pakistan. All the TV channels keep playing Bolly music. Five years ago, Pakistani bands did well. But now Bollywood music has almost taken over. Media too is not really supportive of band music in Pakistan. Most of the singers are trying to make a foothold in Bollywood.
W: There was a time when bands used to be really popular in Pakistan. Now, it is the younger generation which appreciates band music more. In Pakistan, we do proper concerts and not gigs!
I: We made our debut in Bollywood with the promotional track of Maximum, in 2012. The video featured our band along with actors like Sonu Sood, Nasseeruddin Shah, Neha Dhupia among others. Plus, six Bolly projects are coming up, one of which is Remo D’souza’s production. We are supposed to sing for ABCD 2 as well.

Which is your fave Indian band?

Your fave music composer from India?

N, W & I: AR Rahman! His music takes us to a different world! And Pritam is the best commercial music director now.

Your cousin, Shafqat Amanat Ali was part of the band, Fuzon. But he quit in 2006. How difficult is to sustain a band?

N: It depends on clarity and transparency among the band members.

W: Unity is the keyword here.
I: Honesty is very important, I feel.