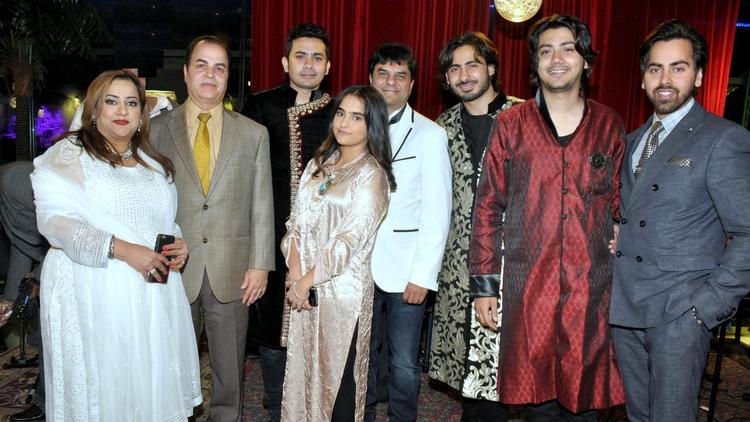 Chicago IL: When the terms “Raga” and “Sufi” come up together, an image of old classical artists performing in front of senior citizens enjoying slow music conjures up. However, when Raga Boyz performed on April 17 at Mezban Restaurant’s tropically decorated banquet hall in Lombard, Illinois, a renaissance of music seemed collaborating harmonically with the ecstatic 300 plus audience.

Raga Boyz, a popular band from Pakistan, performed music of all genres…from Ragas to Rock, from Sufi to Heavy Metal, from Folk to Fusion. Before coming to Chicago, Raga Boyz have performed across the globe in some of the best venues of the world like Wembley Arena (UK) and Radio City Music Hall (NYC). They have appeared with singers like Shakira and Rihanna. They have also won several awards and competitions internationally.

They are the 9th generation of the famous Patiala Gharana, sons of legendary singer Ustad Hamid Ali Khan and nephews of Late Ustad Amanat Ali Khan and Fateh Ali Khan.

Raga Boyz, a band of 3 brothers was formed in 2006 and the name Raga Boyz was coined by none other than Ustad Hamid Ali Khan, their father. The eldest brother, Nayab Ali, is a classical and semi classical singer. He is known for his God gifted voice and soulful renditions of classical and Sufi melodies. Wali Hamid Ali is next. He is the lead vocalist of the band. He is a pop and semi classical singer and composer. A marvelous stage performer, he keeps the audience on their feet with his high octane performances. The youngest of the 3 brothers, Inam Ali is a hard core classical singer. The audience is mesmerized when they hear this 20-year old sing complicated taan – alaap with utmost ease.

Lead vocalist Wali Hamid Ali says, “The love from Indians’ and migrated Indians’ around the world have been encouraging for us as artistes. We always enjoy performing in India, USA, Canada and all around world.

“In India, people greet us with same warmth every time,” says Inam Ali who is a hard core classical singer and the youngest brother among the three Ali brothers.

All the members of FIA attended the show along with great friends. Big thanks to the organizer Ali Khan and the Khan Family for hosting this event and promoting talented artist with the help of DCA (Dr Siraj Ahmed).